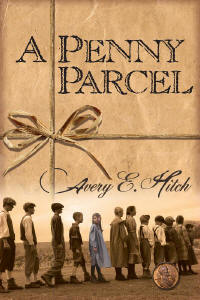 That Girl has a painful memory connected to every normal life activity and every holiday on the calendar.”

In the year 1910, Luke Tanner, and upstanding social icon in the quiet but politically powerful town of Galesburg, Vermont, adopts Ashley, an abused orphan girl. Because the cost of processing the paperwork is a single cent, orphans like Ashley are called “penny parcels,” seen by society as only worth that much. But Ashley doesn’t want a daddy. She would prefer to remain in the security of the orphanage, where her past can remain secret. Luke’s wife, Grace, and their son, Wesley, try to love Ashley and help her break through the emotional walls around her bruised and broken heart. But her inability to live up to Luke Tanner’s standard of performance, as well as her tainted perception of family dynamics, isolate Ashley from those who care about her the most. Fighting his own misconception of truth, Luke begins to believe that Ashley’s adoption has a much higher price than he is willing to pay. With both of them waging war on their own personal battlefields, Luke and Ashley collide. Their conflicts initiate a sovereign tragedy.